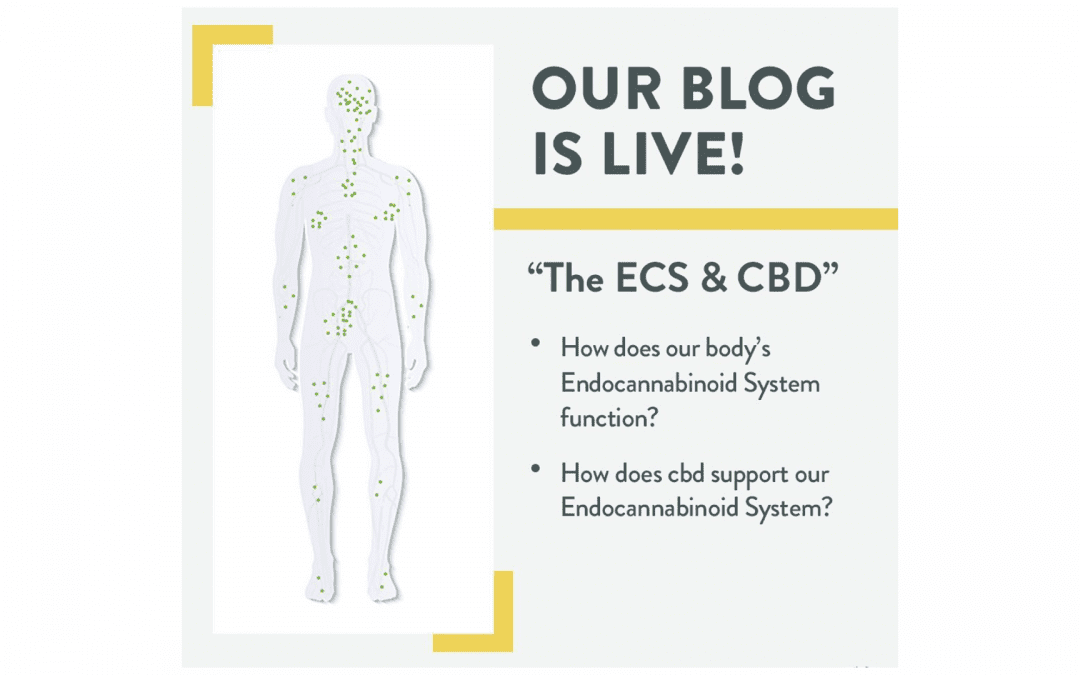 Intro to CBD & the ECS

When CBD (short for cannabidiol) was discovered in 1940 it seemed destined for obscurity. Researchers didn’t understand it, and they weren’t particularly interested in trying to. Every few decades scientists would dredge up the anonymous compound–oftentimes observing promising results–but interest remained low. Then, in the mid-2010s something suddenly changed. Awareness skyrocketed as studies and anecdotes began painting CBD as a veritable panacea, capable of treating everything from epilepsy to acne.

But while interest and excitement about CBD have boomed over the last 5 years, common knowledge and understanding have not always kept pace. In today’s blog, we’ll cut through the hype to explain what CBD is and how it really works in our bodies.

A Balancing Act: The Endocannabinoid System

In order to actually understand CBD, it is necessary to know how it works within your endocannabinoid system (ECS). Like other anatomical systems, the ECS is made of many pieces that work harmoniously towards one goal. The skeletal system, for example, provides the structure of a body, while the nervous system controls what that body does. The ECS has a similarly important job: to maintain homeostasis, to keep you balanced.

When something stresses your body, the ECS works to restore equilibrium. When hunger, stress, or pain strike, the ECS balances things out by stimulating appetites, calming anxiety, or reducing pain. The ECS does this is through a vast network of chemicals and sensors called endocannabinoids and endocannabinoid receptors (endo as in “coming from within, and cannabinoid as in “a group of chemical compounds closely related to cannabinol).

The Bliss Molecule: The ECS at Work

Here’s an example. When you go running, your body releases an endocannabinoid called anandamide (aka “the bliss molecule”). Beyond causing a “runners high,” anandamide also helps increase appetite and manage pain. When anandamide is released and received within the ECS, post-exercise equilibrium is restored in multiple ways: reduced pain balances out the discomfort of physical exertion while increased appetite encourages you to refuel.

There are countless endocannabinoids like anandamide that work within the ECS to maintain homeostasis, and each has its own unique triggers and effects. However, you don’t need to understand every endocannabinoid to see the value of a healthy endocannabinoid system. Forces are always messing with your bodily baseline, so the ECS is constantly restoring your balance – physically, emotionally, thermally, and so on.

When the Balancing System Loses Its Balance

The problem today is that many aspects of modern life can throw the ECS out of whack. In a recent TED Talk, Rachel Knox M.D. explained that ECS dysfunction is a common problem. She lists the top five causes behind ECS disease as aging, processed foods, chronic prescription drug use, emotional stress, and environmental pollutants. And when the ECS loses its balance, we become destabilized, making it even harder to cope with physical or emotional stressors.

Up until now, we’ve discussed how the endocannabinoids that your body naturally produces work within your ECS. However, you can also supplement those endocannabinoids with phytocannabinoids like CBD (i.e. phyto as in “relating to plants,” and cannabinoid, which we’ve already covered).

Fun fact: Whoever came up with the term “runner’s high” was spot on. THC, another infamous phytocannabinoid, is the plant-based equivalent of anandamide, and its effects hit the ECS in the same way. If you wanted to experience a runners high you could either go for a long run or get some THC. One comes from your body, the other from plants, but they hit the ECS in remarkably similar ways.

While hemp plants are particularly rich in cannabinoids, many other plants like broccoli, carrots, cabbage, and echinacea also contain phytocannabinoids. Whether you knew it or not, you’ve probably been supporting your ECS with low amounts of phytocannabinoids your whole life.

The reason that CBD and the ECS are often misunderstood probably stems from the fact that we discovered them in the reverse order. That is, while CBD was discovered in 1940, we didn’t actually realize that the ECS until the mid-90s. This meant that for years, CBD and other cannabinoids were thought of in relation to the plants that make then–namely hemp and the highly-stigmatized marijuanna plant–rather than how they work in our bodies. Today, that’s all starting to change.

In 2018, the Agriculture Improvement Act legalized hemp-derived CBD products, so long as the hemp contains less than 0.3% THC. Since then, the CBD market has been flooded with products that can seem to have conflicting claims: If CBD supports sleep why would I take it in the morning? If CBD relieves back pain why would I take it to sleep? Once you understand that CBD works on the ECS, a system responsible for maintaining homeostasis, it’s multiple benefits start to make sense.

There’s still much to learn about the ECS and the countless different endo and phytocannabinoids, but we already know quite a bit. We know that CBD is the most abundant and heavily researched plant-derived cannabinoid. We know how it works within our ECS, and that it is not psychoactive. We know that many people have found success using CBD to manage anxiety, insomnia, and chronic pain. There is plenty more research to be done on CBD, but given what we’ve discovered so far, that is something we’re very excited about.

Author: Nicole BrownMay 17th - 10 min readWhat's new, what's next, and what it means for our business. Published monthly, the OBX Innovation Briefing is presented by the OBX team as a way of highlighting the latest developments and innovations within the global...

END_OF_DOCUMENT_TOKEN_TO_BE_REPLACED

Author: Nicole BrownMay 10, 2022 - 8 min read In our featured editorial in June 2021, The Research Revolution: The Past Is Prologue, we shared our plans to accelerate safety, efficacy, and application research, in support of the overall advancement of the market from...

This website uses cookies to improve your experience while you navigate through the website. Out of these cookies, the cookies that are categorized as necessary are stored on your browser as they are essential for the working of basic functionalities of the website. We also use third-party cookies that help us analyze and understand how you use this website. These cookies will be stored in your browser only with your consent. You also have the option to opt-out of these cookies. But opting out of some of these cookies may have an effect on your browsing experience.
Necessary Always Enabled
Necessary cookies are absolutely essential for the website to function properly. This category only includes cookies that ensures basic functionalities and security features of the website. These cookies do not store any personal information.
Non-necessary
Any cookies that may not be particularly necessary for the website to function and is used specifically to collect user personal data via analytics, ads, other embedded contents are termed as non-necessary cookies. It is mandatory to procure user consent prior to running these cookies on your website.
SAVE & ACCEPT

Join 10,000+ industry colleagues and get the most recent CBD & cannabinoid-enabled trends, breakthroughs, and special offers directly to your inbox!

You have Successfully Subscribed!